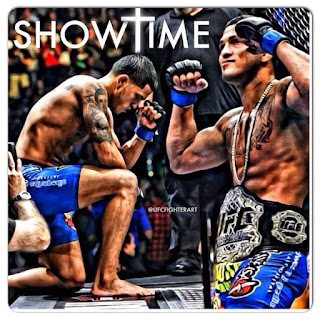 Anthony Pettis is one if not the greatest Lightweight to ever bless the sport of MMA. Way before Taekwondo was popular in the sport, Pettis used his kicks to his advantage. When Pettis stepped into the WEC, you knew he was going to be something special especially since he won his first 7 fights to get their. He went 9-0 before losing to Bart Paleszewski by Split Decision. That only sparked a flame because he would win his next fight via first round knock out and he earned a title match against then WEC Lightweight Champion Benson Henderson. Pettis would defeat him in the final WEC match by Unanimous Decision but doing so in beautiful fashion. The most highlight reel move in MMA history performed in the fifth round that Pettis jumped off the cage and kicked Henderson in the face. After a sour debut from Clay Guida, Pettis torpedoed in the UFC's Lightweight division. He beat the likes of Joe Lauzon, Jeremy Stephens, and Donald Cerrone. Pettis would rematch Ben Henderson but this time for the UFC title. Pettis would win via first round submission. Pettis would defend his title only once to former longtime Strikeforce Lightweight Champion Gilbert Melendez who he defeated via first round submission. A loss to Rafael Dos Anjos for the title made his career hit a 360. Pettis would go on to lose 3 fights in a row to Edson Barboza and Eddie Alvarez before dropping down to Featherweight and defeating Charles Oliveira. A interim title fight that Pettis would miss weight for made it a non-title fight for him. He would get his first finish lost to Max Halloway and suffered a broken hand during the fight. Pettis will always be one of those special fighters and one of my favorite. Him and his brother are the best at what they do and I would love to see him back on track. Though Sergio is his brother, I would like to see Sergio branch off and develop his Dutch Kickboxing so he can be a formidable opponent for Demetrius Johnson. Anthony though, I would like to see fight opponents like Will Brooks, Mickey Gall, or maybe even Sage Northcutt. A fighter like Pettis, the sky is always the limit.