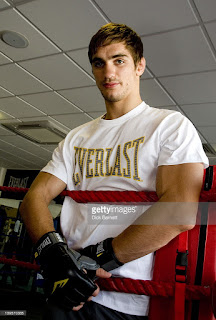 Since 2015 I've been wondering where at one point the biggest top prospect of the UFC Welterweight division is. He hasn't been seen since a UFC on Fox card and lord knows that was a long time. Now I ask this, Where is John Hathaway? He was one of the first fighters to use tae kwon do in his fights and looked very promising as a fighter. He won his first 14 fights in his professional career but a brutal elbow knock out loss to Stun Gun Kim resulted in a hiatus. He's still part of the UFC roster but hasn't fought in almost 3 years. It's unknown if he is healing off an injury or not wanting to fight anymore but I would like to him fight again. I personally think a fight between him and Nick Diaz should both guys return. Both guys haven't won fights in years and someone could break the chain and hopefully get back on the winning track after. Let me know what you guys think in the comment section and who he should fight if he came back?