I want to say that I was absolutely shocked Michael Chandler lost but he will get an immediate rematch due to the fact it was an injury. I hope to see him win the title because he is one of my favorite fighters. Fedor Emelianenko was finished in the first round by Matt Mitrione. It wasn't a surprise to me at all and let's be honest, Fedor is done. With all his injuries and age catching up to him, Fedor's reign of terror is over in MMA. If this was the Fedor of old he would have went through Mitrione easy. One of my favorite all time fighters finally won a world title, Ryan Bader defeated Phil Davis a second time by split decision. Hopefully, King Mo will challenge him for the title or Phil Davis will get a rematch. After finally arguing and building up for the fight, Chael held Wanderlei down for 3 rounds to get a unanimous decision. Wanderlei did land a shot that rocked Chael but it clearly wasn't enough because Chaels double legged takedowns were too much for Wanderlei. It was an alright pay-per-view but it wasn't the best. Still looking forward to see what Bellator does next. Hopefully Michael Page and Paul Daley go at it or Patricio Freire makes another title defense. Definitely on the look out in the future. 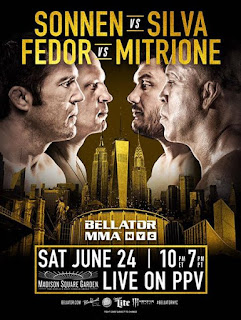