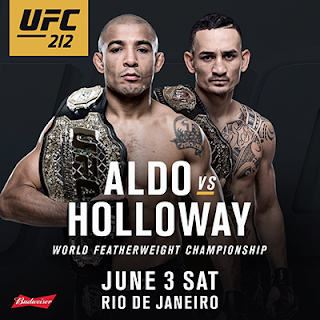 UFC 212 this Saturday and the card stacked with Fight of The Night candidates. Erick Silva kicks off the main card against Yancy Medeiros and all ready I smell a finish. Whether on the feet or on the ground, both fighters can end the fight instantly. Both coming off wins from their last perfomances and both are still high-level prospects. I'm going to love to see how this fight pans out this Saturday. Another interesting main card fight for me will have to be the phenom Vitor Belfort versus Nate Marquart seeing as both guys UFC status may have been on the line. Vitor who's last fight was turned into a no contest due to Kelvin Gastelum testing positive PED's vowed to retire after this fight has since changed his mind. Nate Marquart's career hasn't been the same since arriving in the UFC recieving back to back losses count less times. Last for not least the main event between Jose Aldo and Max Halloway will be for the Undisputed UFC Featherweight Championship. Both guys since losing to Conor Mcgregor have reinvented themselves and really turned it up a notch. Max has been on 10 fight win streak since losing to Conor while Jose has been improving his boxing. This fight has knock out written all over it and each guy has the potential to get a rematch against Conor. It will be a fight out of who wants it more. The young hungry cub or the old angry lion, so who you got in this fight?