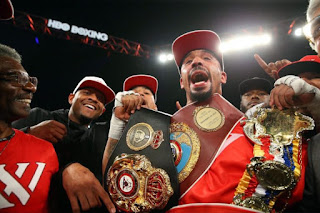 On September 21, 2017, Unified Boxing Light Heavyweight Champion Andre Ward announced after 23 years of boxing and an compelling 32-0 professional record he is calling it quits. Andre Ward who is 33 years old will retire with an Undefeated record following a TKO victory over Sergey Kovolav for his last professional bout. Ward has notable victories over Carl Froch, Chad Dawson, and Sergey Kovolav twice. He is an olympic gold medalist in the Light Heavyweight division of 2004 Olympics in Athens. Ward also made his film debut in the Rocky spinoff "Creed" and the film was a box office hit. Hopefully in the future, Andre Ward will have a change of heart but until then thank you for a great career and for putting on exciting fights. Whatever Andre chooses to do in his future whether it be acting or being a mentor in his hometown of San Francisco, I wish you the best of luck.