Is Michael Page the best fighter outside of the UFC? 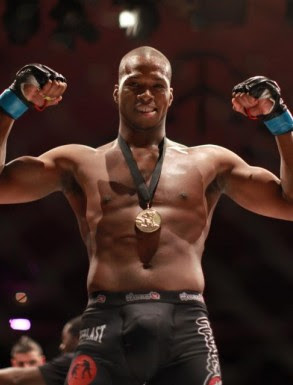 Since his debut as a professional, Michael Page has been a human highlight reel in the cage and has recently made his boxing debut bringing his flashy style to the squared circle. All the way from U.K, Michael Page record consists of an impressive 12-0 with 10 finishes and 9 coming in the first round. Page has the most unique style to me because it the most reckless as he fights with his hands down leaves his face wide open. He makes it work for him because he lures his opponents in because of his amazing footwork, long reach, and tall basketball stature. Page is slowly but surely becoming a household name as every time he fights he leaves the fans amazed by his flashy finishes and slick striking style and he continues to grow as a fighter. When Michael Page burst onto the scene, his knockout victory over Ben Dishman was shared globally and he immediately started getting comparisons of Anderson Silva due to his unorthodox striking. It wasn't until his second fight that Page won via armbar in the first round that you knew this kid was the real deal. He has sparked an incredible wave of popularity, even catching the attention of Joe Rogan and Brendan Schaub on Joe's highly watched podcast "The Joe Rogan Experience" continues to grow. As impressive as Michael Page is he also catches critism as well, because people feel like he is untested as he hasn't faced a highly recognized opponent that can either match him or stand a chance stopping his reign. He recently called out former Welterweight title challenger and MMA veteran Paul Daley citing that they were training partners but now rivals. Rumors say Bellator is setting up that fight in early 2018 in England on a future card. I would like to see Michael Page fight a top contender soon and if he still holds his title, I would like to see Michael Page challenge the always dangerous Bellator Welterweight Champion Douglas Lima. Until then, I'm going to keep watching every highlight reel performance until he makes his next move because honestly I never get tired of watching this guy. If you don't believe me then check out the highlight reel up above and see if you're not amazed by his talent.