The controversy behind the EA Sports UFC 3 cover 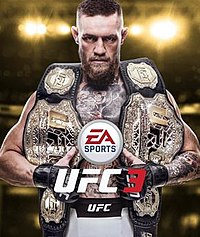 Once again the UFC never fails to ride the "Conor Mcgregor Money Train" as instead of him having a coed for the cover its just him by himself. Not only does he have his Lightweight title but also his Featherweight title that he never defended and Max Halloway is now the champion of and makes his first title defense against Frankie Edgar. Like I said before and for the millionth time "I am a Conor Mcgregor fan!" but for christ sake WHEN WILL THE FUCKERY END! I'm so sick of the favoritism surrounding Conor and the UFC on board with it. He's a champion that never defended either or title and now has been inactive for over a year and is still champion. The rule clearly states that if a champion doesn't defend in 10 months an interim bout will be set which Tony Ferguson is champion. If over a year however, the champion shall be stripped of the title. Which I ask my question of "Why is Conor still Champion?" This has too end the "Mcgregor Era" is killing the sport. At least Anderson Silva and Jon Jones were active and that was only a dream to see them go up and weight and fight for a second title. Conor never even defended his title but he becomes the one to make history and have two belts at once.

Not only am I mad at the cover but the Mcgregor era as a whole since the whole fight game has been about Conor and Conor hasn't been fighting. The UFC has turned into a business and the reason I say that is because we now see Mcgregor on everything and everywhere he nows ventures into other sports and even movies. Who remembers when Anderson Silva wanted to fight Roy Jones when Roy Jones was still one of the best boxers on the planet. Did Anderson ever get that fight and that answer would be a no. What about speculation of Anderson Silva versus George St. Pierre super fight and did that ever happen I can answer that No. What about Jon Jones eventually going up in weight and fighting for the Heavyweight Championship and lord knows that was only a dream. For what it's worth, Bellator will be getting some new talent in the nearby future.

Of all the candidates for the cover of the EA Sports UFC 3 Video Game, Conor wouldn't even be a candidate. If anything Conor should have a lower overall due to inactivity. I say about a 90 or a 91, because you don't want him being too high but also not too low. My picks would've consisted of Demetrius Johnson, Daniel Cormier, or Cris Cyborg because they are all dominant well rounded champions. Hell I might even put all 3 of them at the same time like last years game with Ronda Rousey and Conor Mcgregor. Anything but Conor basically because of the inactivity so we die hard fans could get our sport back.

At this point a fighters union is the best thing to do because the UFC is still on top and fighters are getting unfair treatment. Pay-Per-View fights and fighters are getting put on Fight Night cards and lord knows how many fighters have been sitting on their butts because the UFC won't call them for fights. Not to mention they can't make money in anything else but the UFC so if they don't fight they don't get paid. Maybe we as fans should boycott the cover and hell maybe the whole damn UFC.