If Holly Holm defeats Cris Cyborg, is she the greatest female fighter ever? 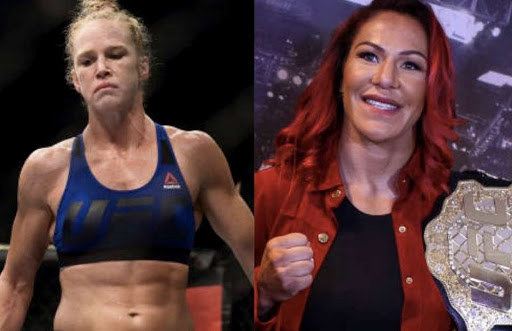 Holly Holm is known for the historic upset she laid on Ronda Rousey. Since that fight, Ronda hasn’t been the same since then. Not only did Holly prove she didn’t have any stand up game but she also proved she’s a poor sport, lacked all the credentials of a true fighter, and she was very overrated. Now, Holly has to face her biggest threat probably in all of her fight career. Cris Cyborg is the most ferocious, well rounded, and scariest female to ever grace the sport of Mixed Martial Arts. Cyborg hasn’t lost a fight since her debut as a professional and she’s the most feared as even the inaugural UFC Featherweight Champion Germaine De Randamie rathered give up her title then to fight Cyborg. I’ve never been so excited to see a female bout since Holly Holm-Ronda Rousey and I’m eager to see if she’ll be able to pull off another upset.