Does the UFC want Stipe to lose to Francis? 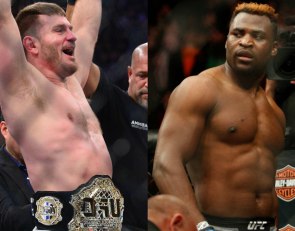 Francis Ngannou and Stipe Miocic both have defeated similar opponents and in similar fashions. Francis however just did it more brutal and is probably the most feared man on the planet. He’s just an intimidating figure with a movie like background to add onto. Ever since Francis made his Mixed Martial Arts debut, he’s been something special and continues to grow as a fighter. Who can forget the knockout that Francis landed on Alistair Overeem where it seemed like Francis tried to punch Alistair to the moon. As a fan, I personally see the same aura of Demetrius Johnson when he became a Flyweight on Francis.

A message to Stipe and his fans: it’s not that we’re anti-Stipe we are just pro-Francis. Francis may have the chance of being the baddest man on the planet because of his scary strength and knockout power. Francis came from the bottom and now he’s fighting at the grandest stage and as a fan how can you not support that?