We have an official super fight going on! 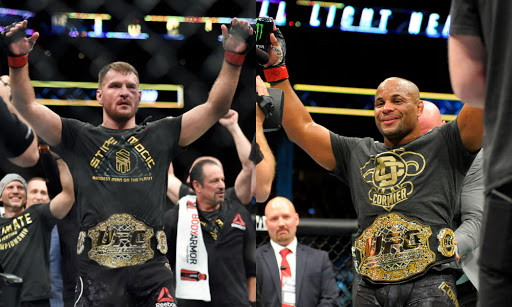 Last week, it was announced that the reigning UFC Heavyweight Champion will be defending his championship against the current reigning UFC Light Heavyweight Daniel Cormier. The UFC even went on to say that they would be even coaching the Ultimate Fighter of Undefeated fighters. Both Cormier and Miocic are coming off of title defenses at UFC 220 as Cormier would put away tough challenger Oezdemir Volkan in the 2nd round. Stipe went on to defeat prospect Heavyweight fighter Francis Ngannou by Unanimous Decision. Stipe currently holds the record for the most title defenses in the Heavyweight division.

Both fighters currently have no top contenders in line that they never beat. The best thing the UFC had to do was make the current champions fight each other. The fight actually makes sense seeing as Cormier who is the UFC Light Heavyweight Champion is undefeated at Heavyweight. His only loss as a professional is to former champion Jon Jones. Cormier holds wins over Frank Mir, Roy Nelson, and Josh Barnett. Cormier has proved time and time again that he is one of the fighters on the planet and a win over Stipe could even be better than Jon Jones.

Stipe Miocic has been an exciting fighter since his debut in the UFC. He won his first 9 wins as a professional and been in wars with guys like Junior Dos Santos and Mark Hunt. Stipe is a warrior and proves it everytime he steps in the octagon. He only holds two losses as a professional and those guys had to really fight to get those wins. Stipe eventually developed his craft and became champion by defeating all time great Fabricio Werdum by first round knockout. Stipe came in as an underdog in his record breaking title defense against all ways dangerous Francis Ngannou. Despite having a bad start in the first round, Stipe ran through Francis after Francis gassed during the fight. Stipe obviously won by unanimous decision and made history by defending the Heavyweight Championship 3 times.

This fight will be similar to BJ Penn versus George St. Pierre for the second time or Conor Mcgregor versus Eddie Alvarez as both fighters are currently champions and in their prime. Hopefully, this fight won’t be so one sided as both of those fights since both of these guys fought some of the greatest fighters to ever live. Cormier has defeated the likes of Alexander Gustaffson, Dan Henderson, and even the great Anderson Silva. Stipe on the other hand has defeated Fabricio Werdum, Alistair Overeem, and Junior Dos Santos all former World Champions.

Great decision by UFC promoters and hopefully it will live up to the hype. I personally think Daniel Cormier will win by submission but if anyone can pull off an upset it will be Stipe Miocic. The odds are the greatest thing about this fight seeing as both fighters have defeated both of their challengers in dominant fashion. Who do you guys have in this excellent super fight?