When Amanda Nunes defeated Ronda Rousey back at UFC 207, she solidified herself as the Bantamweight queen. She defeated Ronda and did it in just short time as well seeing as she only needed 48 seconds to do so. With that she was fore sure one of the UFC’s biggest star though, right? Wrong! After Amanda would defeat Ronda she would then face and defeat the likes of Raquell Pennington, and former rival Valentina Shevchenko. Well since there was really no real contenders in their respective division then it was only right if the two female juggernauts to clash. Cris Cyborg who was undefeated for over 10 years finally met a match that can basically match her in anyway. 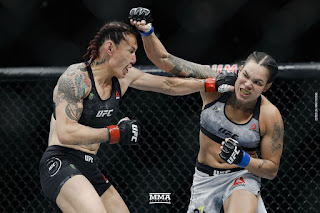 Leading up to the fight there was numerous backlash from both fighters would make accusations leading up to the fight. Cyborg claimed Amanda ducked her while Amanda claimed she had been using steroids her whole career. After the weigh-ins, talk was cheap and it was now put up or shut up. Cyborg came out vicious and looked like she would put Amanda out early but like a true warrior and not only survived the onslaught but came back with her own as well. Amanda would put Cris away early and become the first ever woman UFC double champion and still is the only female to do so. 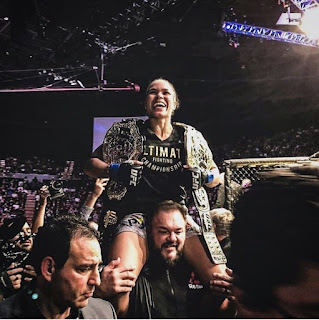 Amanda has now beaten two of the UFC’s greatest female fighters and will fight Holly Holm in the future. Even though Amanda is at her peak and defeated great challengers, is Cris Cyborg still the greatest female fighter ever? Cris Cyborg not only ran the female Featherweight division but she has struck fear in her opponents and fighters still fear to face her. With the poor treatment she has been received from her by the UFC and Dana White I think that she leaves the company when her contract expires. 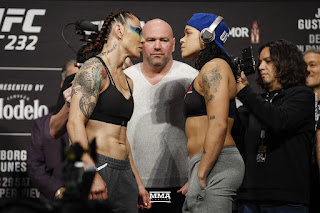 This is a great debate as a fight fan and please let me know what you think in the comment section and please share this post for me? ;-)
Labels: Amanda Nunes Cris Cyborg Featherweight Female Fighting Mixed Martial Art Ronda Rousey UFC Vale Tudo