Is Gervonta Davis being carried by Floyd Mayweather and T.M.T. 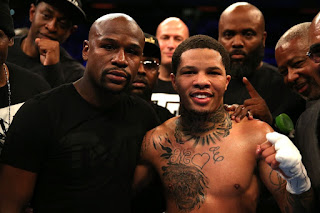 Since Gervonta “Tank” Davis has burst onto the scene he has been impressive with his Knockouts and ring ability. Since he has burst on the scene as a professional, he has been under the umbrella of “The Money Team” and has surrounded himself with the likes of Adrien Broner and Floyd Mayweather. They all style and profiling when it comes to living lavishly outside of boxing and that turns people’s attention come fight night. The real question however is not who that he beat but who is he going to fight? Since Tank burst on the scene, he has quickly became a house hold name but when is the next challenge that may give Tank a run for his money? Gervonta has had numerous social media battles with fellow Champion boxer Tevin Farmer who displays phenomenal defense and footwork has been calling Tank out for years now. There’s always been speculation about these two fighting soon but no real news happens when setting up this fight. Boxing has slowly built up stars that can easily make super fights with others but some fighters just don’t want a real challenge. I think Tank is not one of these people but maybe the Money Team is holding him back to reach his full potential. .