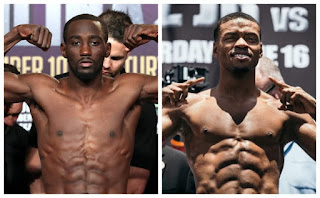 With a cluster full of super fights available to the boxing world is it safe to say that MMA is in jeopardy of losing the top spot back to boxing? With interesting fights like Anthony Joshua vs Deontay Wilder, Gervonta Davis Versus Vasyl Lomachenko, and of course Terrence Crawford Versus Errol Spence jr. Boxing has slowly built up new stars that can almost pick up the “Mayweather Mantle”. Anthony Joshua who has finished almost every opponent he faced besides Joseph Parker is hands down the best Heavyweight in the world and most ducked fighter in the division despite having 4 out of the every 5 major world titles in boxing. Deontay Wilder coming off of his split draw with Tyson Fury faces Dominic Breazeale this Saturday night on ShoTime Pay per view. Gervonta Davis who is a champion in his respected division and has built a name for himself in the sport of boxing still lacks the name resume and still has yet to be tested as a professional. Though he has been going back and forth with fellow champion Tevin Farmer, Gervonta doesn’t look like he wants to fight Farmer anytime soon. Tank needs to fight a well-known fighter soon however if he expects die hard boxing fans to take him serious. Tevin on the other hand has been beating way more tougher opponents despite not having a perfect record. He has 4 losses but has mastered the sweet defense of boxing and applied great athleticism and has giving us a once in a lifetime athlete. Watching Tevin is really a thing of beauty because his slips and counters reminds me so much of Pernell Whittaker in his prime. Not to mention Tevin’s timing and accuracy are picture perfect. Boxing is full of hungry competitors where’s MMA’s top brand struggle to give fighters decent pay for their work. Just lately Donald Cerrone Versus Al Iquinta happened while Canelo Versus Danny Jacobs was going on. Danny Jacobs who was paid a whole lot less than his opponent Canelo Alvarez was paid more than the entire UFC Fight Night card combined. In MMA, if you’re name is not Conor Mcgregor then you’re probably not going to make a decent living as a fighter. Not to mention, MMA is struggling to make new stars that can get on Mcgregor level. I truly doubt if Mcgregor wants to fight again because of the success of his wisky business. The UFC needs new stars and how the way Dana White is acting then I doubt that will happen soon.