After Tyson Fury’s performance last night is he the best Heavyweight boxer on the planet??????? 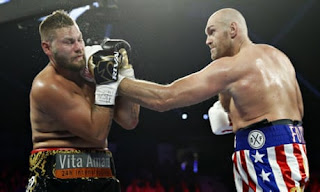 As boxings Heavyweight Lineal Champion made another successful title defense and maintained his undefeated record there is speculation that he maybe the best Heavyweight fighter on the planet. Fury (28-0-1) defeated Tom Schwartz (24-1) to retain his Heavyweight crown and hand Schwartz his first ever loss in his professional career. Fury dominated the fight and even at one point dodged a barrage of punches with seemed to look like with ease. Tyson has not really shown any signs of getting hurt in his fights other than against WBC Champion Deontay Wilder who dropped him the last round and somehow Fury got back up like a possum in the road. The two are rumored to be having a rematch late next year. 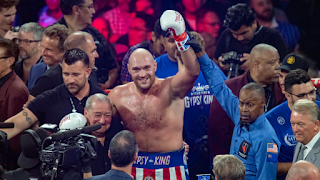 One thing I can say about Fury is that he’s very versatile and can definitely show all aspects of boxing which is unheard of in the Heavyweight division. Fury is definitely the biggest threat at beating Deontay Wilder (41-0-1) and after his performance against Schwartz, I’m definitely looking forward to their rematch later on.