After what happened this Saturday, the Boxing and MMA Gods leave me shaking my head 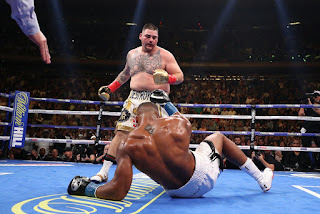 After yesterday’s events I would not believe in a million years that Anthony Joshua would lose to someone who looks like they just won an ice cream contest. Not in a million years could you tell me that Alexander Gustaffson would lose against Anthony Smith in a fight he was winning and just get took down and submitted. Well unfortunately all that happened in one day probably the biggest upset in boxing history happened. The biggest may have been Buster Douglas beating Mike Tyson but after  last night it made me go “At least Buster Douglas was in shape”. Muscles don’t win fights but after yesterday, Anthony Joshua may need a whole new gameplan or new camp to be a complete fighter. 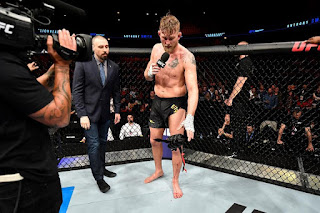 Gus losing to Smith was more sad then it was shocking because the man who was closest to beating JBJ hung it up. Gus had all the credentials to be champion but he just can’t pull the trigger when it matters most. He has great footwork along with boxing and decent Wrestling skills but he just gets a little sloppy in some fights. The best Gustaffson is definitely one of if not the best fighter on the planet. If Gus calls it quits and it’s for good then he is definitely the greatest MMA Fighter To never win the UFC Championship. As for Joshua, I hope he gets it together but the Deontay Wilder Mega-Fight had the potential to be the biggest Pay-Per-View ever. That is now in the drain as well as the pay day to go with it.
Labels: Anthony Joshua Bellator Boxing Champion Championship Deontay Wilder Devin Haney Heavyweight Kevin Lee Mayweather Mixed Martial Art Night Prospect