The benefits of doing “Martial Arts” 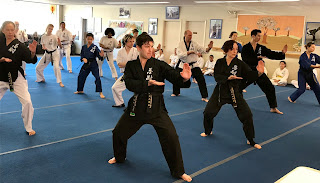 In today’s society, depression and attack on masculinity through media tactics not to mention politics with half a brain calling the shots it is good to get away or have a place of peace. For me that was my boxing gym in Pittsburgh and has always been like that since High School. One reason I love most about boxing is the art it incorporates with stance, motion, and power generated through footwork and hips. Those who may have done traditional martial arts like Karate or Taekwondo may know more than just punching or kicking but grappling as well. Danger can come at any moment and you should be ready in almost any situation when the time is right. I highly recommending taking a Martial Art and make sure you’re coach or sensei is legit because there are a lot of fakes who watch karate movies and fraud like their bad asses so please be careful and do your homework. 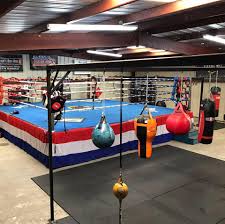 The reason I chose boxing because after a situation where I was jumped in a neighborhood in my hometown of Pittsburgh, a local boxing native recommended it to me and it was the best thing that I decided to. Boxing made me realize that I was tougher than I thought and made me get in shape. I’ve sparred dudes way bigger than me and smaller and let me say don’t ever judge a book by its cover because I almost got knocked out for it. Since leaving college in 2015, it has been on and off and I really can not see myself turning professional ever. Besides I want to get into the promoting side whether it be Mixed Martial Arts, Boxing, or both. For right now I’m entering my Junior year in college and hopefully one day I will be able to live out my dream. 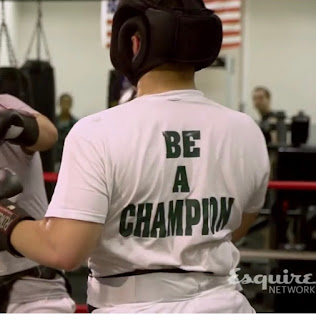 Boxing even got me on spot on a TV Show on the Esquire Network called “White Collar Brawlers” and that is me pictured with the “Be A Champion” shirt on. I had fun and met guys like Ray Mancini and Paul Spadafora. If you want to get in shape then definitely take up a Martial Art but just because Boxing worked for me it may not work for you. Me being from the hood and being a fan of boxing made it easier for me to catch on and hang with some of the people at the gym. Most people who try boxing and after their first sparring match quit. After my first sparring match and me getting my ass whooped I wanted more. I know I was a sick kid but it was a thrill and I love the game of boxing in every way.
Labels: Boxing Fight Gym Mixed Martial Art