The most despised person in MMA today

If there’s anyone I hate more in the sport of Mixed Martial Arts it has to be Colby “Call The Cops” Covington. One thing this douche represents is everything wrong with the planet like shitting on foreigners, saluting a mad man/racist of a president, and last for not least shutting up when he’s supposed to be talking. Colby is a Internet gangster with a superstar personality for no reason and he ducks fights left and right. He defeated RDA last year in June and has backed out of his title fights against Tyron Woodley and Kamaru Usman. 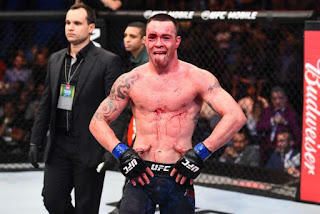 It pains me to say this because I absolutely despise him but his bite is bigger than his bark because he has top level wrestling and is undefeated in his last 11 fights and has even won the UFC interim Welterweight Championship. It is unclear of his future in the UFC and has even made threats to quit the company. Hopefully he can get a fight with Kamaru Usman so that Kamaru can beat the dog you know what out of this dude. I really dislike Colby Covington lmao :-(