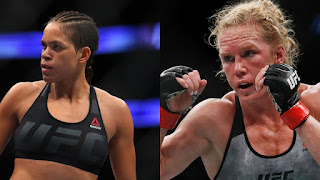 If there is anything you can say about these two is that they both hold the biggest upsets in not only UFC but MMA history. Holly Holm shocked the world when she exposed to what was thought to be unstoppable former champion Ronda Rousey (17-2) via headkick in the 2nd round. Amanda Nunes (17-4) would later Knock out the former Champ Rousey as well but she shocked the world when she defeated the terrifying and most dangerous female fighter probably ever in Cris Cyborg (20-2). Not only did she finish the former UFC Featherweight Champion but she did it in little to no time. Amanda is now being cited to as the greatest female fighter ever (even though the UFC refuses to give her little to no recognition) she still continues to submit her legacy as the greatest female fighter.