Since when in the UFC has a fighter who has defended his title more than one time not get an immediate rematch just off of one loss? When BJ Penn loss to Frankie Edgar it was a pretty dominant bout for Frankie but that didn’t stop promoter Dana White for booking an immediate rematch and getting basically the same results. Tyron has spoke frequently of Dana White and the UFC’s poor treatment of the fighters and seeing how out spoken Dana is so quick to bash his fighters, at this point I believe him. While Tyron isn’t in the octagon, he does things in Music, Movies, and Broadcast Analyst. This man was UFC Welterweight Champion from July 2016 up until March 2019 and has defeated the likes of Darren Till, Demian Maia, and Wonderboy Thompson (2 times). No questioning Tyron’s success as a champion as he was the rightful champion and had dominated the division for nearly 3 years. 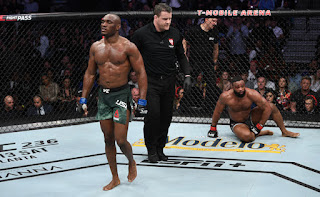 Though it was a very lackluster fight, Kamaru Usman did dominate Tyron with his wrestling and to be honest I was expecting Tyron Woodley to Kamaru. Salute to Kamaru for being the first Nigerian born UFC Champion but a rematch is a must. Colby Covington was rumored to get the winner of these two but at this point Colby is so pathetic on Twitter that I can’t blame the UFC for stripping him of his interim title. If Colby isn’t the rightful number one contender then who is at this point? It has been since March of 2019 since the belt has been defended and a fight needs to be set up. Nothing makes more sense than Kamaru Versus Woodley 2 from here on out.