Why is Colby Covington scared of Tyron Woodley?

Colby Covington is a bit of a troll but when it comes to this particular fighter Colby seems to flap his gums rather than fight. Colby has a thing for picking on guys he knows not only won’t fight him but can’t fight him. He recently made statements about former roommate of his and Current UFC Light Heavyweight Champion Jon “Bones” Jones for his most recent run in with the law. Another one that he seemed to catch the eye of was former UFC Heavyweight Champion Fabricio Werdum who he had threw a boomerang at Covington who took legal action. For a person who is a tough fighter and can really bring it, Colby makes himself look a little bit like a coward. Since Colby has last fought he beat Rafael Dos Anjos in a clear cut Unanimous Decision and won the UFC interim Welterweight Championship. Personally, I thought that was awkward seeing as there was no need for an interim title because then Champion Tyron Woodley was healthy. 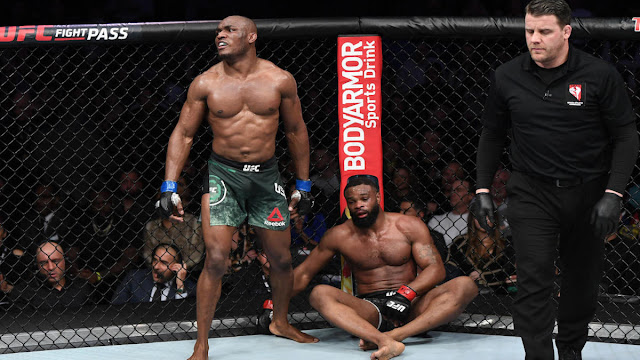 Tyron is coming off of his first loss since 2014 against Rory Macdonald as he loss to Kamaru Usman for his Welterweight Championship. I felt Tyron should’ve got a immediate rematch seeing as the man defended his title 4 times and not to mention most of the time he was hurt. Dana is not going to give him the rematch out of spite but that’s bad for business. Tyron is one of few fighters that competes at the top of the Welterweight food chain but does not like the treatment that the UFC gives him. Tyron was scheduled to fight Robbie Lawler but a hand injury forced him to pull out of this fight. If not this year then maybe next year we’ll get Tyron Woodley Versus Colby Covington?
Labels: Fight Mixed Martial Art Tyron Woodley UFC Welterweight