Am I the only one that can’t wait for Nick Diaz to make his return back to the octagon? 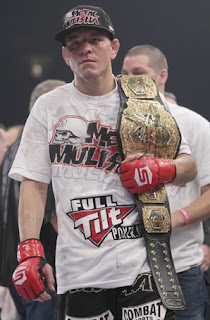 It’s been over 8 years since we seen former Strikeforce Welterweight Champion Nick Diaz in action and I’m furious about it. Nick is always entertaining and I cannot recall when he has ever had a boring fight in his career. New fans do not know how exciting it is to watch this man fight because the boxing he displays is as fundamental as it gets as well as awkward looking too. He throws his arms like an inflatable man but does damage. If he does return does he fight someone top 10, start from scratch, or get a money fight? I personally would like to see fight a Tyron Woodley, Mike Perry, or even a Conor Mcgregor for ppv buys.

Nick has laid the grown for most trash talkers in MMA but Nick is the only one that can do it in and outside the octagon and that is why he’s different from every other fighter. He brings it every time and it is not hard to see why this man was so successful in Strikeforce. Whether Nick comes back full time or not, there is a lot of opportunity for him and I can’t wait until the UFC lets him back in action.