Who is next to fight Kamaru for the Welterweight Championship?

After his performance over a very lackluster Robbie Lawler, Colby Covington steamrolled a five round victory and possibly won a title fight. However, fellow Welterweight Leon Edwards has been on a tear in the division and has the highest win streak in the division currently. Jorge Masvidal who owns the quickest knockout in the history of MMA is probably the fan-favorite for next up at the champ. All 3 fighters are currently coming off of very impressive victories but only one can fight Kamaru Usman next. More than likely it will probably be Colby Covington seeing as he was the former UFC interim Welterweight Champion. 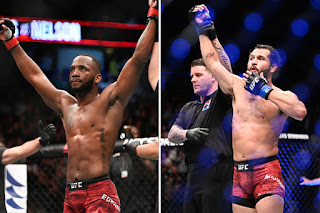 Seeing as their is bad blood between the two, maybe the UFC should consider Leon Edwards Versus Jorge Masvidal following Edwards win over RDA earlier this year. I really don’t want to see Colby fight for the championship and more importantly I do not want to see him win it but it’s the only fight that makes sense right now. Also, it is unknown if Santiago Ponzibbibbio is healthy or not but he is also in the title picture of these 3 and hopefully he can plan a comeback before this year is over. Even though I felt he should have been given an immediate rematch after his loss to Kamaru Usman, Tyron Woodley still may just be the biggest threat in the division and one win could have him knocking on the door to a title match.