Following Dustin’s loss to Khabib last Saturday, former UFC Lightweight And Featherweight Champion Conor Mcgregor took to Twitter and expressed his rematch in Moscow which many fans speculated that meant Khabib. But actually the former double champion never really said a name but only a suggestion as he did face Poeier back in 2014 in which he won by Knockout in the first round. Since that fight, Dustin has bumped up to Lightweight and has made surpassed his old self entirely. He has beat the likes of Anthony Pettis, Justin Gaethje, and current UFC Featherweight Champion Max Halloway. Conor Mcgregor on the other hand has made himself a part timer as he hasn’t competed since October of last year. Mcgregor has had his fair share of legal trouble but hopefully soon he’ll be planning a UFC return against a tough opponent like Dustin Poeier or Justin Gaethje. 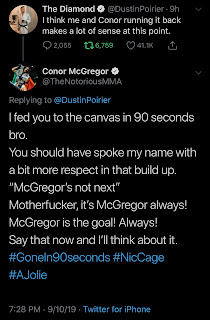 With back and fourth going on Twitter, do you feel that a rematch is overdue and at which weight class either Lightweight or Featherweight? Of course I feel that it’s best to have it at Lightweight so that maybe the two could rematch Khabib possibly. Not only is this a interesting match up but Gaethje has been vocal as well regarding Conor Mcgregor and he may come as a potential opponent in Mcgregor’s return. Just look at the tweets he’s been posting about Mcgregor and they are harsh. 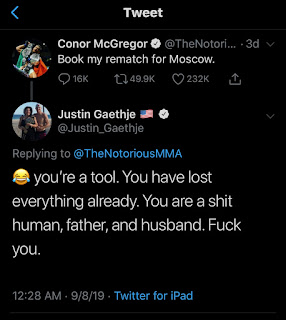 These are definitely fighting words and I feel that Gaethje wants all the smoke with Mcgregor and who else could put on fireworks like Gaethje? I say the UFC sets either fight up especially Mcgregor being the cash cow of the company even without him fighting. It is overdue for a Mcgregor return and either fighter is up for the challenge.